No.6 Calls A Character Witness! 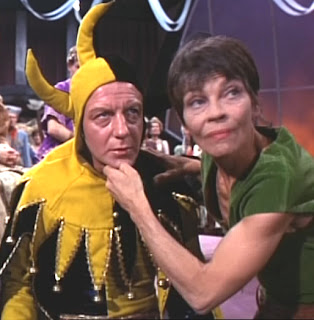 It was at the Dance of the Dead that No.6 was put on trial for the possession of a radio, which breaks the rules of the village. In his defence No.6 called a character witness - that of Roland Walter Dutton - a man who was due to die, and therefore the best man fit to say the things that need to be said. However, No.6 was too late, because the doctor-No.44 had gone too far in his experiments in attempting to gain further information from Dutton, which he had already got in the first place.
I wonder what it was No.6 thought Dutton could tell the court, those things that needed to be said? Whatever they were, No.6 wasn't going to put his life on the line, and we as the television viewer shall never know!
Be seeing you.
Posted by David Stimpson at 14:09