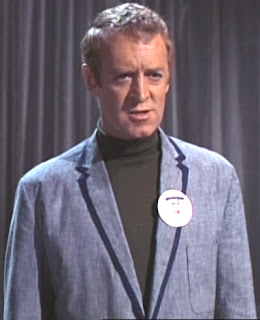 This is No.14, assistant to No.2 in the episode Hammer Into Anvil, played by actor Basil Hoskins. No.14 wants only to serve, to be allowed to assist No.2, and possibly to gain promotion because of his keen loyalty.There is nothing remarkable about No.14, save for the fact that he looks like No.22, who is assistant to the retiring No.2 in the episode It's Your Funeral. 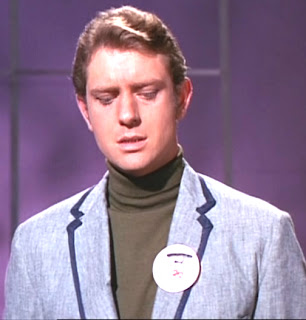 This is No.22, played by actor Mark Burns. No.22 works quietly for No.2, who he knows is going to be assassinated/executed, but can do nothing about it, even if he wanted to. He like No.14 obeys orders. There is nothing remakable about No.22 either, save for the fact that he looks like No.14! Both Mark Burns and Basil Hoskins are of the same height, same build, same hair colouring, and both are wearing the exact same attire for their character. The only thing different about them are their numbers. So I've often theorised if these two characters were supposed to be the same one, but played by two different actors. The look-a-like actors and the fact they wear the same attire, makes a strong case for my theory, and the difference in numbers a mere bagatel!
Be seeing you
Posted by David Stimpson at 14:11