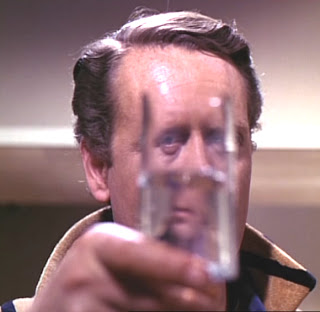 There are still anomolies within the Prisoner serieseven which remain unclear to this day, some forty-four years on. One is the water No.6 drinks on an evening during the episode of A B & C. No.6 pours his usual cup of hot chocolate into the sink, thereby effectively avoiding being drugged, and fills a glass with tap water, and drinks that himself. Moments later No.6 collapses unconcious onto the floor. So, was the tap water drugged or not? If so then No.6 was outwitted. If not, No.6 is being successful in playing his own game against No.2. But in that case, the doctor-No14 whilst in the laboratory would have surely detected the fact that No.6 was not in fact unconcious! so yes, in my opinion the tap water was laced with a drug.
Be seeing you
Posted by David Stimpson at 09:25