60 Second Interview With A Gunslinger 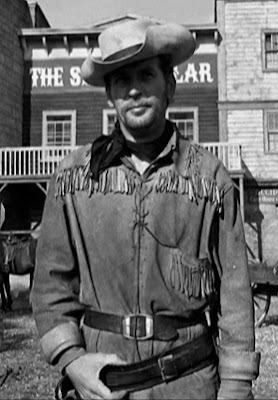 No.113 "Howdy stranger. Say, you're new in town. Just got off the stage?"
Gunslinger "Do I look like an actor?"
"Why no, course not. Say you wouldn't be looking for the Judge would you?"
"You wouldn't be looking for trouble would you?"
"Me? No siree."
"Well you sure ask a lot of damn fool questions."
"I'm a newspaperman, I contribute to The Harmony Times."
"Who's he?"
"Oh don't worry about him, he's my photographic colleague. He's going to take your picture for the newspaper."
"Not if he doesn't want to take up permanent residence in Boot Hill he won't!"
No.113b "Smile" {flash goes the camera, bang goes the gun, and one photographer lies dead in the street}.
"Why didn't you want your picture taken mister?"
"The Indian's say that taking a man's picture you take his soul."
"Well you ain't no Indian!"
"I'm half Cherokee."
"Say mister who are you?"
"The Cherokee's called me Running Bear, because I used to go about with no clothes on! But you can call me Frank."
"Frank? Not Frank.......shoot 'em up Dawson?"
"You got a problem with that?"
"Say, you're the fastest on the draw this side of the Pecos!"
"On both sides of the Pecos! I'm wanted in 7 territories."
"What for?"
"Sheep rustling, cattle rustling, Bank robbery, train robbery, rape. Murder, horse stealing, rape, drunk and disorderly, and various other misdeaners."
"You said rape twice!"
"I like rape, you got a problem with that?"
"Well none of us is perfect! Say mister what are you looking for?"
"The nearest ranch, the Bank, the railroad station, the Kid, the livery stable, the town hen house, and the Saloon!"