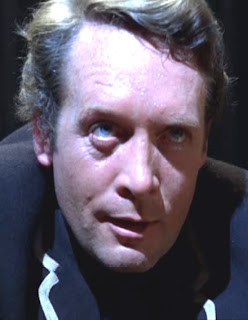 'The Prisoner,' has thus far been a life-time sentence for me and others of my kind.
"What, you blame me for that?"
"You knew what you were doing."
"I created a television series."
"I was twelve when I first watched the series."
"The Prisoner is not a children's television series!"
"Then why put so much childishness in it?"
"Like what?"
"Nursery rhymes for example."
"I didn't put sex in it!"
"Violence?"
"I didn't put sex in it!"
"Drugs?"
"I didn't put sex in it!"
"You made a prisoner of me, and many others like me."
"Is it my fault that you are so weak minded. You should have rejected!"
"You?"
"No, the Prisoner!"
"Danger Man' made you a household name, John Drake was my childhood hero."
"Me!"
"No john Drake!"
"But I am John Drake!"
"And the Prisoner?"
"Yes."
"John Drake and the Prisoner known as Number 6 are one and the same?"
"Yes, they are both me!"
"The Prisoner both made and broke you."
"If you like."
"Well that's how it appears to me."
"Your interpretation?"
"Yes."
"And you interpret 'the Prisoner' as being what?"
"Well as a 12 year old, as a sequel to 'Danger Man, and at the time I was not the only one to arrive at that conclusion."
"It isn't!"
"That's not what you told Frank Maher."
"A good man Frank, a gentleman of violence."
"It was your fault."
"What you're blaming me again!"
"You should have given the Prisoner a name."
"I did."
"What Peter Smith, that's almost as bad as John Jones!"
"John Jones, who's he?"
"Well John Smith then."
"That would have been too obvious."
"And Peter Smith isn't?"
"It's not my fault. Interpret 'the Prisoner' in whatever way you like!"
"We do."
"Yes I know, I've read some of it. And for what it's worth you are the worst!"
"Why me?"
"Some of the rubbish you write. I mean how the hell do you arrive at some of your conclusions? And sometimes you go too far!"
"At least I do not miisinterpret situations."
"Like what?"
"Like when during the opening sequence, some say the Prisoner is entering a building via the "way out," thus demonstrating his rebellious nature. But in reality the Prisoner is simply leaving the underground car park via the "way out."
"Depends on how you look at it."
"Yes, but which is right?"
"Oh get back to your blog!"
"Yes, and that's another point. If it wasn't for you I wouldn't be writing drivel like this everyday, all week and every week."
"Damned cheek. Haven't I given you purpose? What else would you be doing, working in soeme dead-end job that you hate? Your life has been leading up to this. You are doing something worthwhile. Peope, out there across the world enjoy reading your Prisoner blog everyday, would you deprive them?"
"No of course not."
"Then don't blame me."
"But you made me like this."
"So if you don't like it why don't you resign?"
"I, I...."
"You see, you can't do it! I have given you more then your fair share of fifteen minutes of fame over the years, and you've lapped it all up, enjoyed every minute. So don't blame me for making you the Prisoner that you are. If you don't like doing something resign and be done with it. I did."
"And you ended up in the Village"
"Quite."
"I resigned once."
"Did you end up in the Village?"
"No, the Labour Exchange!"
"Ah not so important after all!"
"But I did sometimes find myself waking up in the Village."
"Portmeirion?"
"Same thing."
"Not quite the same thing."
"I followed in your footsteps."
"Ah following the ways of the master."
"I was being you!"
"You need to get out more! I say you're not Johnny Prisoner are you?"
"Being you got me noticed!"
"As someone to avoid?!"
"An Unmutual!"
"Your not one of them are you?"
"Who?"
"An Unmutual?"
"No."
"Six of One?"
"Not any more, I walked out?"
"Why?"
"I became disillusioned."
"And now?"
"I am a free man!"
"A good place to end."
"Yes, it was becoming boring anyway."
"Will we ever meet do you think?"
"What, an eternity in the Embryo Room with you....I saw what you did to Number 2."
"I was sorry about that."
"Your sorry for everybody...is that why you resigned?"

Be seeing you
Posted by David Stimpson at 09:31