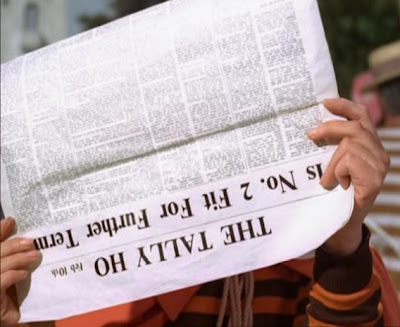 This is how you see the newspaper being read by No.14 in the episode 'A B and C.' yet if we invert the picture and mirror it at the same time, we may see it in it's true proportions. 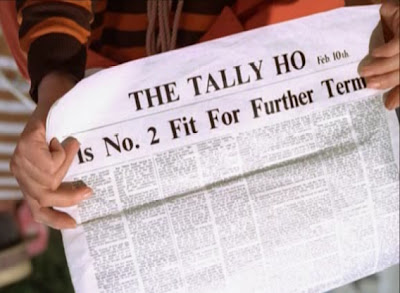 So, is No.2 fit for further term? Somehow I've never thought that it was a question aimed at No.2's ability, but that of his health. You see the poor old chap suffers from a stomach ulcer, hence his drinking milk, its apparently good for the ulcer. However, No.2 does get a further term of office in 'The General,' despite his health problem! But perhaps you might like to make a mental note of the date of the newspaper. 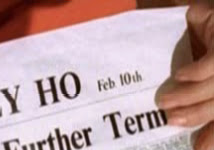 Yes, it's Feb 10th, which as it happens is the same date on The Tally Ho newspaper in 'The Schizoid Man.' 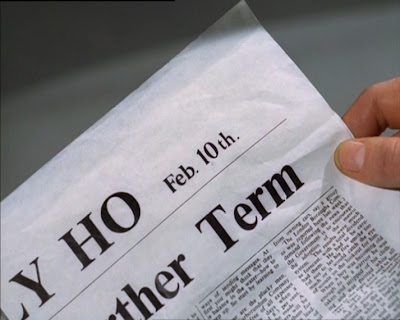 'the Prisoner ' is surreal enough, without the possibility that two episodes are taking place simultaneously on February 10th, that date which makes the two issues the same issue. And I cannot believe that there is a question over the ability of No.2 during 'The Schizoid Man.' Yet this issue of The Tally Ho is the only newspaper to have a date printed on it. Obviously the date Feb 10th is to enforce on No.6's  mind that it is February 10th, which is the date of his day-date calendar in his cottage, which of course it isn't, as it's somewhere between 4 to 6 weeks later on!
The reason for this issue of The Tally Ho is that it is gywell for both episodes, and the television viewer simply is not supposed to observe the date of The Tally Ho read by No.14 in 'A B and C' and make nothing of the end of the headline in 'The Schizoid Man!' And yet, to think that it might be possible to have two episodes taking place simultaneously on the same day, well it's an interesting notion, one which might addle the brain, so we will not go there. After all, as I've said, the simple answers are often the best answers!

I'll be seeing you
Posted by David Stimpson at 09:26