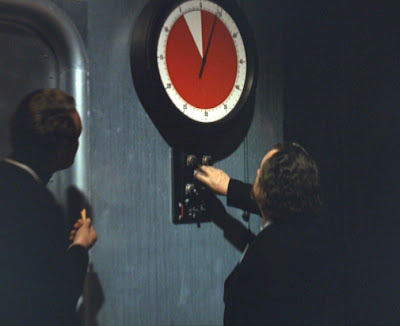 The steel door of the Embryo Room is operated on a "time-lock" system. Once the "time-lock" is set, nothing can override the clock. Which when you think about it could be an extreme disadvantage. What if the say deliberations between 2 and 6 had ended a couple of days early, they would have to have had to remain in the Embryo Room untill the "time-lock" release. Or if either one of them became ill, I mean No.2 could have a heart attack or something, they would not be able to get out to get medical treatment Or if one of them had actually died, the other two would be left sat with the corpse!
And finally, the way No.2 is so expert when setting the clock-timer, that it makes me think he's done it before!

BCNU
Posted by David Stimpson at 08:37