And so we arrive at the final episode of 'the Prisoner,' or is it the beginning? Either way it could very well be both, and then where are we? In a vicious circle created by Patrick McGoohan that's where!
Tonight it's a question of rebellious youth, a man who is accused of biting the hand that feeds {don't know when he did that} and the former No.6 who in having survived the ultimate test, has vindicated the right of the individual to be individual. He may not now be known as No.6 or indeed any number at all, he is now addressed as "sir." Oh yes, and there's something about a democratic crisis!
The former No.6 is faced with himself, although it could be Curtis, the final desperate manipulation of No.6 to try and break him. There is revolution, bloody and violent, except there's no blood, and only the armed security guards get killed!
Then comes escape! No.1 sealed in the nose cone of the rocket, No.6 in the cage aboard the Scammell Highwayman transporter, yet they escape at precisely the same moment. 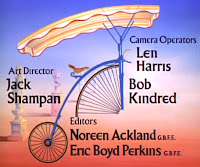 No.2 returns to the House of Commons, or is it the House of Lords? In any case it's somewhere within the Houses of Parliament. No.48 tries to hitch a lift on the A20 somewhere between Dover and London, and in either dirction on the dual carriageway. While No.6 and the Butler return to No.1 Buckingham Place. But only the Butler enters the house, the front door operating automatically and with a very familiar electronic hum. No.6, having driven off in his Lotus 7, so that the adventure, the allegory, the morality play call it what you like, can begin all over again, the next time you place the video tape or DVD into the machine!

I'll be seeing you, and the Prisoner again one day no doubt.
Posted by David Stimpson at 09:57