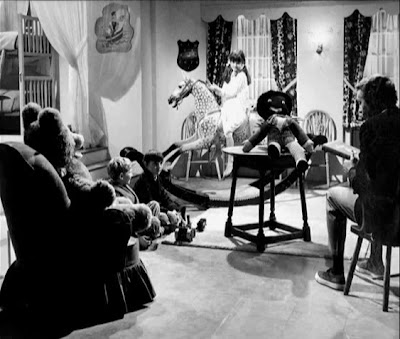 Why......Is it always assumed that the children seen in the nursery during ‘The Girl Who Was Death’ were abducted to the Village simply to encourage No.6 to “open up” to children. Why could they not have been born in captivity, to coin a phrase? However if one exercised ones imagination enough, you could account for the children by saying they were brought to the Village because they are "child geniuses being shaped for the future, or born in the Village as clones!
Anyway the children are very encouraging, as they want No.6 to tell them more, but as No.6 puts the children to bed they do their best to encourage him to come again tomorrow, "oh promise you will come." And he says he will, but I think for No.2 there is no further point in involving No.6 with children, who had hoped No.6 would drop his guard with them. As it was a complete failure, and No.2 would have to pay the price, and yet he would be the third No.2 to be given a second chance!.
I suppose one has to ask the question, if this is a real nursery in the Village, or is it a put up job?!