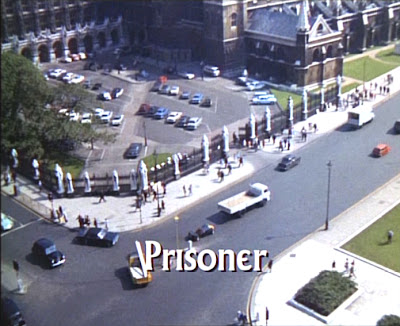 It is said, and I know because I was one of those who said it, that at the end of 'Fall Out' the Prisoner is just as much a Prisoner at the end of the series as he was at the beginning simply because for the Prisoner there is no escape. But how do we know this? Well by the single word we see on the screen as the Prisoner is on his way to hand in his letter of resignation.......again! And yet, what if the word PRISONER did not appear on the screen, what might we have been to believe then? That the Prisoner had finally escaped the Village, that he is now free.......free to return to his former colleagues, either to get his job back, or to use them in order to gain the answers for his incarceration in the Village. But yet is that not where the problem lies? Because has he not tried that before, twice as it happens, and where did that get him? No, before the Prisoner knows it he'll be safey ensconced back in the Village!
It would be nice to think that the Prisoner had finally escaped the Village, that he had finally attained peace of mind. But as it is the man always runs foul the moment he goes running back to his former employers. He tried to do it once during 'The Chimes of Big Ben.' He succeded in 'Many Happy Returns,' and was allowed to in 'Do Not Forsake Me Oh My Darling,' although that was for an entirely different reason. And now at the end of 'Fall Out' he's about to make the same mistake once again.

Be seeing you Number 6!
Posted by David Stimpson at 08:49