We kick off this time around with something futuristic from ‘A B & C,’ those film cassettes of 'A' 'B' 'C' and of Engadines party. A single reel of 8mm film in a plastic cassette, I wonder how that works then? Because its not reel to reel as in the case with film of this kind. 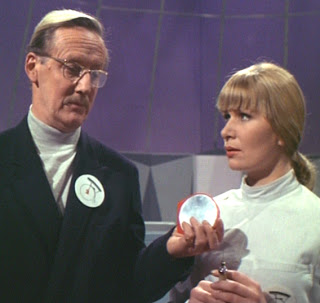 Wuring Once Upon A Time No.6 admitted to No.2 that he's the boss "He thinks you're the boss" said No.2. "I am" No.6 replies. "I'm No.2. I'm the boss." "No.1's the boss" No.6 responds. But this is conflicting, because does No.6 realise he is No.1? Because after the Supervisor-No.28 has entered the Embryo room he asks No.6 what he desires, and No.6 says "No.1."
*
In 'Arrival' a Village citizen is attacked by the Village Guardian, either suffoctaed to death, or simply into unconsciousness. In that scene, there is a slight mistake, as the man in the striped jersey turns into a man wearing a oink blazer, that man in No.100 {Mark Eden} of 'It's Your Funeral.' The question is not why that few seconds of film of No.100 being suffocted by the Village Guardian from 'It's Your Funeral.' But why was No.100 supposed to have been attacked by the Village Guardian in the first place?! 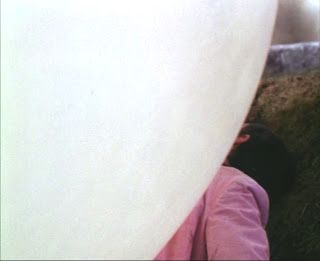 *
During the episode of ‘It's Your Funeral’ No.100 exchanged No.6's wrist watch whist No.6 was taking part in a Kosho match. When No.6 returned to his locker his watch had stopped. He didn’t realise that it wasn't actually his own watch, shouldn't he have noticed this? After all, No.6 is supposed to have a strong sense of identity, and that you won’t catch him out on his possessions.
The general wear and tear on my own wrist watch would certainly have been an indication that it is in fact my wrist watch. but then again the village administration is clever, damned clever and replecate anything perfectly.
*
Be seeing you
Posted by David Stimpson at 08:05