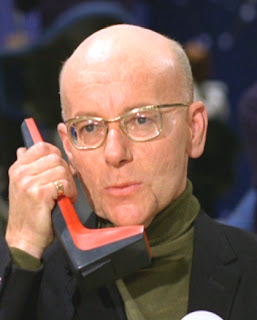 One might say that this man, No.28 a Supervisor, is a large cog in the machine. He is dedicated to his task, and is rarely seen outside the confines of the Control Room, and such is his importance he is never heard to be referred to by his number, but by his title "Supervisor." What's more actor Peter Swanwick is a fourth constant within 'the Prisoner' series, along with Patrick McGoohan, Angelo Muscat, and the white mass of the Village Guardian.
It might not have been intentional to use other actors to play the role of Supervisor, such as Earl Cameron, Micheal Nightingale, Camilla Hasse, and Basil Dignam where Peter Swanwick is absent. This was possibly brought about due to unavailability, or through ill health, Peter Swanwick died in November 1968.
Posted by David Stimpson at 08:28