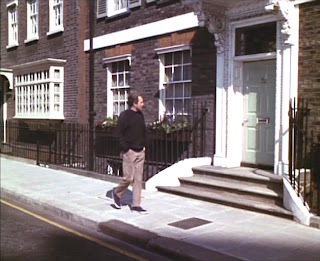 After being washed up on the beach at Beachy Head - having climbed the chalky cliff face - encountering a gypsy camp when a young gypsy woman shows him the first real act of kindness since his abduction to the Village - dodging a police roadblock - jumping into and then out of the back of a Luton van and into the road of Park Lane - the Prisoner known as Number Six finally makes it back home to No.1 Buckingham Place, Westminster. Only to be confronted by a housemaid who clearly sees herself well above the raggedy man she is confronted with standing on her doorstep, who she clearly takes to be a tramp! But just a minute...why did the Prisoner knock on his own front door? Who did he think would be there to open the door? 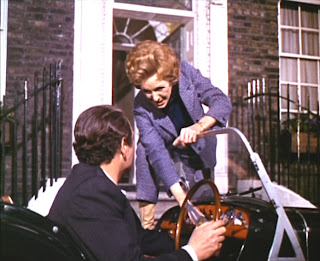 It would seem that his house and his car are now in the hands of a woman, Mrs Butterworth! And I think he takes this very calmly, especially when Mrs Butterworth lets him borrow his own car! Oh by the way Mrs Butterworth, it's easy to stop that nasty overheating when in traffic, just remove the number place from the front grill, it's preventing air getting through to cool the engine!
So here we go again, the Prisoner is about to make the same mistake for a second time, by going running back to his ex-colleagues, those of the Colonel and Thorpe. I mean the Prisoner had been betrayed once by two ex-colleagues the Colonel and Fortheringay. How did the Prisoner know that he would not be faced with those two a second time? Had he learned nothing from the first time? Perhaps he might be so desperate to solve the enigma of the Village, that he had to take the chance!
Well the Prisoner gives a good report of the Village, together with ground based photographic evidence. He convinced the Colonel enough to begin an investigation into his ex-colleagues report, and every detail is checked, save for the boat!
With the aid of naval Commander, and an RAF Group Captain, calculations are made based on the Prisoner's basic navigational log. A search area incorporating southwest Portugal and Spain, and Morocco. A Gloster Meteor jest aircraft is requisitioned, and permission for refuelling at RAF Gibraltar is given.
What astonishes me is, that all this from waking up on the beach at Beachy Head to the Prisoner taking off in the Gloster Meteor jet takes but one day, if we are to take it that the Prisoner spent 25 days at sea, arrived home to No.1 Buckingham Place on March 18th, then to arrive back in the Village the next day on the Prisoner's birthday March 19th.