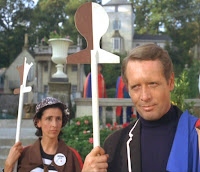 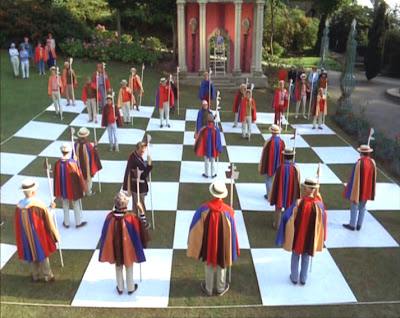 "Sir, do you play chess sir?" Now why do you think No.14 asked No.6 that? It's a question I've never asked before, because the answer is a simple one, to be able to be even a pawn on the human chessboard the chesspiece has to know how to play the game!
In the Village at the time of a 'Prisoner' Convention, when the human chessmatch re-enactment is played twice, there is no problem for a chesspiece. All he or she has to do, is listen carefully for when his or her chesspiece is called out, and then make the move called out by one of the two players according to the noted move or moves on a card attached to the chess pole the chesspiece is holding. In other words the human chess match has been choreographed previously, the moves having been worked out in advance. And this way anyone can stand on the chessboard and make their move or moves without having a knowledge of how to play chess.
But in the Village of 'the Prisoner,' each one of the 32 chesspieces has to know how to play chess, in oder to know how to make their move or moves. Yes each chesspiece has to listen carefully for when his or her move or moves are called out. However there are no noted chess moves on cards attached to the chess poles to indicate each move! This is why I used to think when No.14 said "You play a fine game" to No.6, he was talking about the chess match. But having said that, No.6 only makes one move on the board, and even then he has to be prompted to make it by no fewer than 4 pieces. So that cannot be right!

Be seeing you........tomorrow back on the chessboard!
Posted by David Stimpson at 08:39