A Favourite Scene - When No.6 Isn't So Full of Himself! 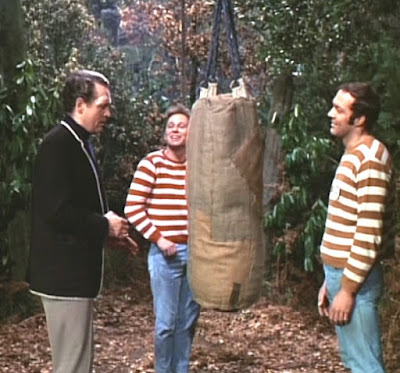 In ‘A Change of Mind’ when Number 6 returns to him gymnastic apparatus, even though he has avoided two further doses of the sedative Mytol, he’s still not feeling quite himself. He pulls the climbing rope, looks up at the high bar, and for a moment thinks about jumping up but doesn’t. Then he turns his attention to the punch bag. Clenching his fist he makes to punch the bag…..but he can’t. Number 6 has had all the aggression taken out of him, he’s not so full of himself, not so much punch in him this time. Number 10 and Number 16 are back to pick another fight with Number 6. The first time he vanquished the pair, now they have returned to seek their revenge on a more placid Number 6. But even then they are not up to the mark, vanquished for a second time, and left lying unconscious on the forest floor, Number 6 is now like his old aggressive self once more.
Still in the woods, Number 6 comes across Number 86 who is picking flowers. 86 has to report to Number 2, she wants to make him happy. She also claims to be higher than Number 2, that’s probably the Mytol talking! Anyway she has to report, but first Number 6 has something to show 86…………his wristwatch! I used to think that the watch Number 6 uses to hypnotize Number 86 with was the Electro Pass given to him by Number 9 in ‘Arrival.’ But that was a Hamilton automatic, Number 6’s wristwatch in this case is a Tissot. Hypnotism, is there nothing Number 6 cannot turn his hand to? Mind you the sedated state of Number 86’s mind did make the task that more easier for him!