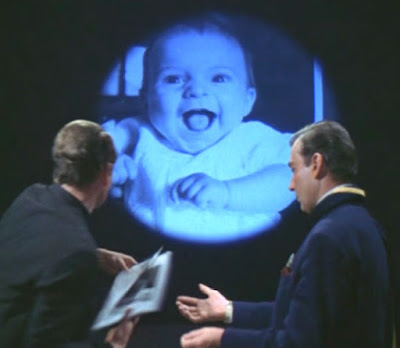 {Is that really Number 6?}
On the morning of his arrival in The Village the Prisoner is invited to join Number 2 in the Green Dome for breakfast. But it’s a working breakfast, not that the Prisoner eats his breakfast, and Number 2 has already had his. During the Prisoner’s debriefing Number 2 shows him images of when he was a baby, the photographs in the Prisoner’s personal file are projected onto the wall screen. Suddenly the Prisoner snatches the file out of Number 2’s hands and begins to flick through the file, but back to front, which plays no effect on the pictures projected on the screen. The photographs are of moments in the Prisoner’s life, from the cradle to………… the moment he discovers there is a camera behind the mirror, and over there, yes over there too as someone is keeping him under the closest possible surveillance. In fact those photographs give the impression that the Prisoner has been under surveillance since the day he was born. Either that or somehow Number 2 had been able to get his hands on the Prisoner’s family photo album!
I know they wanted to know everything about the Prisoner, that Number 2 wanted to bring his file up to date. But really, was there any need to go all the way back to his childhood, even as far back as a baby? Mind you Number 2 did once say of the Prisoner “Even as a child there is something in your brain that is a puzzlement, I intend to discover it. “A” find missing link, when I’ve found it I will refine it and tune it, and you will play our game. “B” put it together. And if I fail, “C” BANG!” So it appears the Prisoner’s current trouble stems from his childhood {as any psychologist might tell him} and the answer is to be found in A B and C once more, even though the extraction of that answer might not be as easy!

Be seeing you
Posted by David Stimpson at 07:46