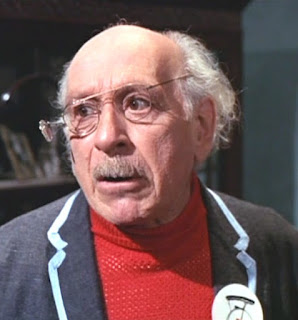 Number 51 is a watchmaker and it’s quite possible that that is precisely why he was brought to The Village. For that reason and that reason alone. Possibly he went to The Village of his own free will. However by the time he found out what it was like, there was no leaving The Village, he had effectively become a prisoner, without having had committed a crime. Judging by his accent it’s possible that he was either Austrian, or of Swiss nationality, and may have at one time been employed by a watch making company in Switzerland. He might well have carried out the work on that wristwatch in ‘Arrival,’ the Electro Pass!

Number 50 {Monique} is his daughter, but she does not have the same accent as her father, so its quite on the cards that Number 51’s daughter was born in The Village. That in turn would suggest that the Watchmaker arrived in The Village with his wife. But there is no sign of 51’s wife, only his daughter, so perhaps Number 51 is a widower and relied upon his daughter to look after him.