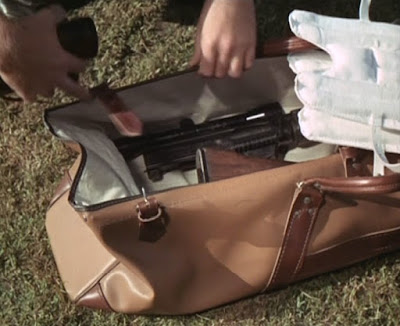 No doubt someone might be able to identify the rifle hidden in Potter’s cricket bag, the dismantled rifle hidden in the bag, I think is a Belgium rifle – the 7.62 NATO calibre FN-FAL semi-automatic, with the addition of a telescopic sight, although I could be wrong. Don’t tell me Potter was licensed to kill, a 00 number?! That seems highly unlikely! Who was he going to shoot with it anyway, the Girl? Even if he was, by the time he’d managed to assemble the rifle the Girl would be miles away! No, more likely the rifle was the Colonel’s, after all the cricket bag belongs to Colonel Hawke-English, and Potter was just looking after it. After all Potter wasn’t there to play cricket, he was supposed to be watching the Colonel’s back. But instead he used the pair of binoculars to keep an eye on the crowd, and a very attractive girl with very shapely legs. Mind you had he kept a much closer eye on her then Potter would have been able to save the Colonel’s life, and possibly apprehend the Girl into the bargain. But let us not forget its Potter I’m writing about here, and because he took his eye off the ball, the Colonel was blown to smithereens at the crease {that stopped play} one run short of his century. And Potter, he was put out in the cold working as a shoeshine boy in the street, and contact man for ZM73.
Footnote: The same actor, Christopher  Benjamin also played Potter in the ‘Danger Man episode ‘Koroshi,’ and as it happened he met Drake in a record shop. I like to think that fictionally the two characters are the same, although Christopher Benjamin always said that was not the case, the two characters being totally different. But then what about Potter in ‘Do Not Forsake Me Oh My Darling,’ that’s not Potter from ‘The Girl Who Was Death’ played by Christopher Benjamin, nor is it the same character, but played by a different actor Frederick Abbott. It’s the name you see, Potter, unless it’s a very common name, or code name used by underlings within British intelligence!