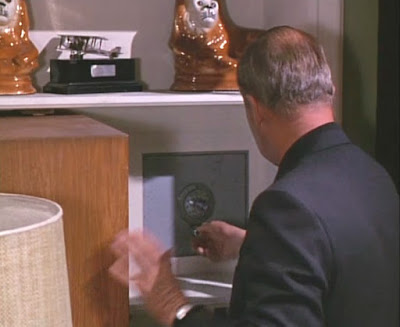 I wonder if that wall safe had been incorporated into the replica of the study in Number 6’s cottage? I bet it wasn’t, not if no-one knew it was there. And yet they might have done if a detailed examination of the room had been made in readiness for the replica room to be made. Measurements would have had to be taken, a close study of everything in the room. Surely they wouldn’t have missed the safe. And seeing as the safe was there, set in the wall behind the television set, ZM73 should have put the receipt for that roll of film in the safe instead of leaving it for safe keeping with Janet Portland. It might have been a lot safer there than it was in Miss Portland’s supposed safe keeping! Well how else would Mister Carmichael get his hands on those transparencies without the receipt?
On another subject, I wonder what that model of the aircraft is? I’m attempting to identify it, but thus far with no success! It’s a pity one cannot read what’s on the silver plaque!