A Favourite Scene - Dance of The Dead 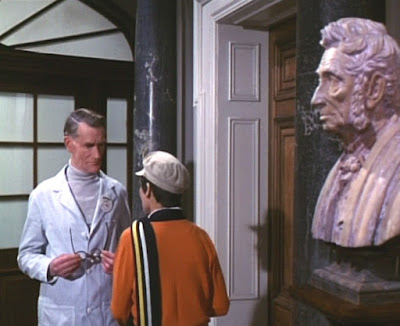 “You’re late.”
“There’s a lot to do.”
“Are you going in?”
“To make my report.”
“Does it concern me and Number Six?”
“No……we’ll over look that, and put it down to enthusiasm.”
“Oh thank you. Could you get me a directive about Dutton, he’s being rather difficult!”
Surely the doctor should have used Number 42 instead of Dutton’s name, but then the television viewer wouldn’t have known who he was talking about if he had! 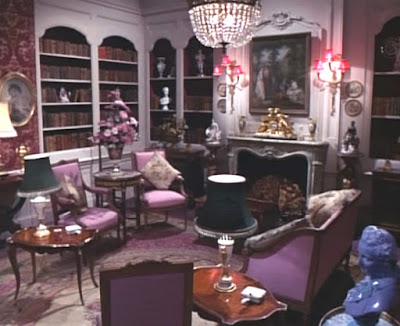 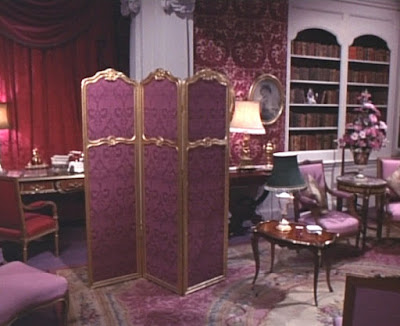 Well why shouldn’t Number 2 go in, after all it is her room, and no doubt a replica of her own room somewhere at home in another place. The room itself certainly has a feminine touch {which is strange considering its current occupant} and with a French influence stemming from the 18th century. It does make one wonder if this same room is used as accommodation for all the Number 2’s, after all the Green Dome is hardly Number 2’s residence, merely an office.
As for this room, which was probably redecorated and refurnished for each new incumbent Number 2, one can only feel for the painters, decorators, and the people responsible for furnishing all the room and cottages in The Village, but perhaps not as frequently as this particular room.
The room is elegant and yet functional, hence the writing desk and of course the teleprinter through which Number 2 not only sends her reports, but also it seems, receives her instructions. But just a minute, does not Number 2 receive her instructions from Number 1? After all that is whom we assume Number 2 is speaking to on the telephone in that early scene. The teleprinter gives the impression that Number 2 communicates with people somewhere beyond The Village. That being the case why confine that idea simply to the current Number 2? For all we know all Number 2’s may well communicate in the same way with their masters somewhere out there, beyond The Village. And if that is the case, then I do not really see a reason for Number 1 to be anything more than just another prisoner, at this point in the series!