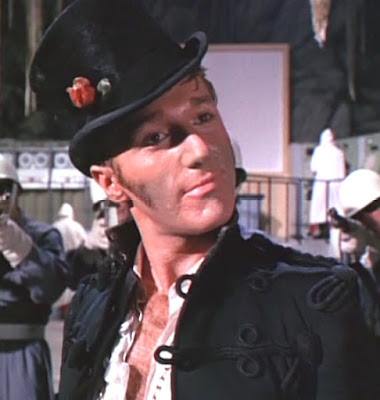 It would seem that Number 48 had seen the errors of his ways, he had seen the light, and wanted no more to do with The Village, because he was with them, but then he went and gone. Perhaps he was a Top Hat official of administration, the Top Hat 48 wears is suggestive of that.
But perhaps, as a friend of mine suggested,  maybe after seeing the light he just refused to change. Himself and his clothes.. Also, we do not know for how long he had been held in custody. And that’s reasonable enough, and we don’t know how long Number 48 had been in The Village. I did once think that Number 48 was the former Number 8. I know Number 8 possibly died at the end of ‘Living In Harmony,’ and he probably did, but they could have resuscitated him in the same way they resuscitated Number 2. After which Number 2 had seen the light, that he wouldn’t be hypnotized by Number 1 any longer, that if he were to die he would die with his own mind. That might be the same reason for Number 48!