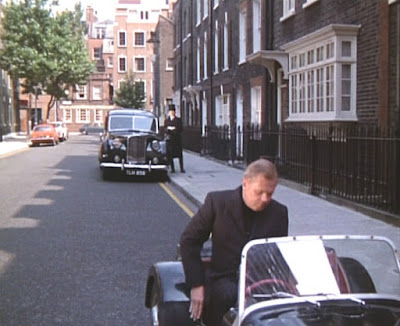 From the moment the Prisoner/Colonel left the underground car park, he was followed by two Undertakers in a black hearse. And by the time he arrives and parks his Lotus 7 outside his house, the Undertakers are there waiting for him. And that makes us think we’ve been here before!
So why are the Undertakers there? Sir Charles Portland told the Colonel/Prisoner that he was intrigued enough only to have him followed wherever he goes. So where’s Potter at this point? Perhaps he had not yet been assigned to follow the Colonel/Prisoner. As for the Undertakers, they seem to be in the right place but at the wrong time, unless of course they are about to abduct ZM73 that is. If they do I think they’ll find they have the wrong man!