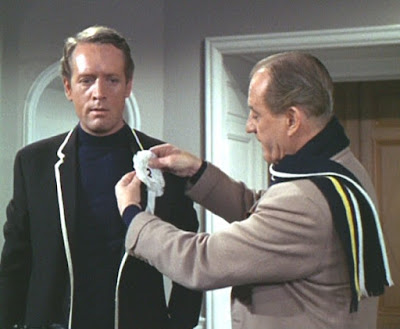 Number 2 casts his vote!
Even Number 2 votes for Number 6. Perhaps there was an agreement that the two candidates wouldn’t vote for themselves. But did Number 6 vote for his opponent, or did he abstain? Because Number 6 is seen at the ballot box still wearing his rosette! Also why is Number 2’s ballot box empty? He should have received at least received 20 votes, judging by the number of his supporters standing on the lawn during the last exchange between the two candidates. Number 2 observes that Number 6 is doing rather well, but Number 6 isn’t one to carp!