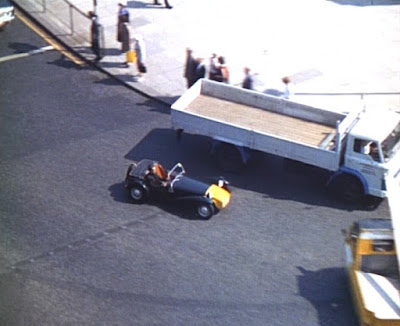 The above image is taken from ‘Fall Out’ {although its actually unused film footage originally shot for the opening sequence to ‘the Prisoner’} and so at this precise moment, as ZM73 drives over Westminster Bridge and passed the Houses of Parliament he is not the Prisoner, because he’s between two situations. In the first place he has just returned to London having escaped the confines of The Village, and in the second place he’s just driven from his home on his way to hand in his letter of resignation because after that, the end of ‘Fall Out’ is the beginning of ‘Arrival,’ in effect completing the circle.
Home At Last!
The former Number 6 has dealt with Number 1, used force to free himself of The Village with the aid of three confederates, and after a long journey has managed to return to his home in London. However he is not a man to let the grass grow under his feet, and no sooner is he home then he’s off again behind the wheel of his Lotus. We see him driving passed the houses of Parliament obviously on his way to that underground car park again, and then to an office he knows very well where he originally handed in his letter of resignation. But this time he’s back, and he’s looking for answers, and by hook or by crook he expects to get them…..well something of that nature.
Using a certain amount of artistic license the end of ‘Fall Out’ is similar to how it was in ‘Many Happy Returns,’ that having returned to London, he eventually has two calls to make, one in town, the other in the country. So that when we see that final scene in ‘Fall Out,’ he’s making two calls, one in town, the other to see the Colonel at his country residence!
Physically the former Number 6 has escaped The Village, however mentally he is still a prisoner, on the basis that he doesn’t have the answers to his questions. For example he’s not sure which side runs The Village, and if he doesn’t find the answer here, he’ll find them elsewhere!
Be seeing you