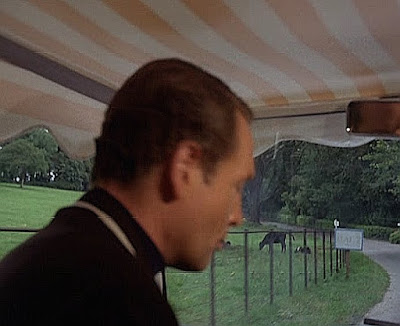 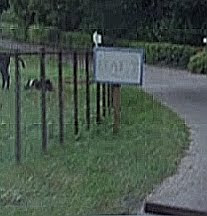 What’s that sign doing there? It appears to read HALT. The sign is seen a little way on the bend in the road, for a couple of seconds in ‘Arrival’ after No.6 is being driven away from the hospital. And can be seen again in ‘Checkmate’ when No.8 is following No.6 and the Rook in a taxi. It suggests that taxis are not permitted passed that signpost. Not that any notice was taken if that’s the case. The sign doesn’t appear as other signposts about the village. So is it a production sign to do with filming of ‘the Prisoner’ if so the Moke’s didn’t stop at the HALT sign. So the signpost might have nothing to do with the filming, but more to do with Portmeirion itself. Although it doesn’t have a permanent look about it.


Be seeing you
Posted by David Stimpson at 06:43