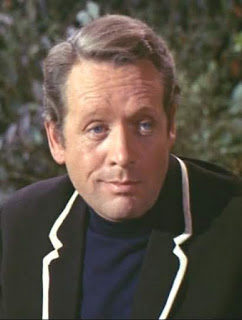 “The whole Earth, as the village,” such is No.2’s hope. As for No.6 he would like to be the first man on the Moon! Such is this man’s desire to get as far away from the village as possible, certainly the atmosphere there would be very different to what it was elsewhere! Or perhaps he simply has the desire for his own company and no-one else’s. Well he got that in ‘A Change of Mind’ when the people of the village turned their back on him. We may like to think No.6 is a lone wolf in society, but he isn’t, because he needs the interaction with other people. We all enjoy our own company from time to time, but as the English 17th century author John Donne said in one of his sermons “No man is an island. No one is self-sufficient; everyone relies on others.”
Number 1 Given A Rocket? 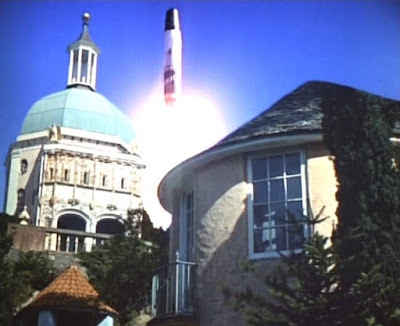 Why was there a rocket in the village in the first place? No doubt it arrived on the back of a Scammell Highwayman Transporter {see my book the Prisoner Dusted Down} but why was it needed? The Blue Streak rocket which we see superimposed onto the piece of film in ‘Fall Out’ suggesting it was a missile carrying a nuclear payload which No.6 launched in the episode. And yet the rocket had no warhead, because No.1 was sealed in the nose cone, and there were four Orbit Tubes {life support tubes} inside the rocket, suggesting when eventually launched, the rocket was bound for somewhere or something beyond the Earth’s atmosphere. Whether the rocket was capable of reaching the Moon is doubtful, and even if it was there was no indication that the rocket was capable of landing on the Moon’s surface. Neither is there any indication of the rocket containing a Moon Lander, nor for that matter was there any sign of spacesuits! Perhaps the intention was to fly a manned rocket around the Moon without the capability of making a landing.
Nevertheless the rocket was launched by No.6, which has suggested to some enthusiasts of ‘the Prisoner’ that No.6’s previous employment was as a rocket engineer. Nonetheless for that, remembering No.6 did show the desire to be the first man on the Moon, he did launch the rocket in full knowledge that his other self was firmly secured inside the nose cone of the rocket. Thereby at least giving himself the opportunity of attempting to reach his goal! Certainly No.1 achieved escape velocity.