I understand that it was Frank Maher, Patrick McGoohan’s stunt double and stunt co-ordinator on ‘the Prisoner’ who provided all the posters and pictures for the episode ‘Living In Harmony.’ He stated that the posters are of the time, however there is a slight anomaly amongst them which we will come to shortly. It has been more years than I care to remember since I began to research the posters seen on the walls of the Silver Dollar saloon and the sheriff’s office for my book ‘The Prisoner Dusted Down.’ Although I’m pleased the book covers a number 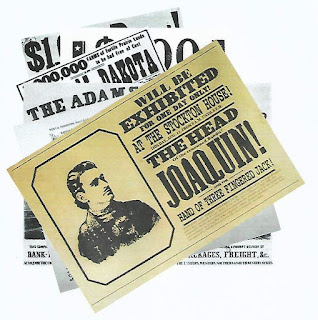 of the posters. I originally began researching the posters seen in ‘Living In Harmony’ for my manuscript some 15 years ago, and have always been disappointed that I was unable to track down the rest of them, that is until now that is. However it was about four months ago that I decided to return to researching the posters once more, and managed to track down all the rest, including ‘The Bishop Is Coming,’ that particular poster was the hardest to find, and I had just about given up all hope when one day a good friend of mine emailed me saying he had managed to track down the poster for me. I was highly delighted to say the least. And this article along with the posters which will appear on my blog over the coming weeks will compliment the research I carried out for my book.
The location of the American town of is somewhat ambiguous at best. The top poster advertises the exhibition of the head of Joaquin and the hand of “three fingers” Jack Garcia in 1853 in , the county seat of . In fact the exhibition was staged all over the State of , but never outside the State of . In 1906 the exhibition went to which was unfortunate, because the preserved head of Joaquin and the three fingered hand of Jack Garcia were lost in the earthquake of 1906. So we have a location, the State of along with a date 1853 for the Town of . But still the poster is questionable, what would a poster presumably printed locally in be doing displayed in the Town of ? If we examine the WANTED posters we have a date for Tom Nixon an outlaw and member of the Sam Bass gang that robbed a Union Pacific train at , on . Does that put Harmony in the State of ? Belle Starr was another outlaw married to Sam Starr. 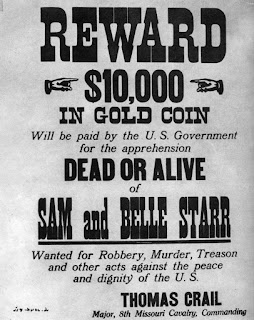 Belle came to a violent end, shot in the back on in . Belle associated herself with other outlaws such as the Younger brothers, and Frank and Jesse James and others. A portrait of Belle Starr denotes her as the “Queen of The Oklahoma Outlaws.” So does this wanted poster for Belle Starr place the town of in the Sate of Oklahoma? Well no, because the WANTED poster was issued in Belles home State of by Major Thomas Crail of the 8th Missouri Cavalry.
There is a framed portrait of Annie Oakley “Little Miss Sure Shot” dated around 1894. She was born 1860 in , died in 1926 in . Annie travelled widely throughout the , , {being presented to Queen }, and with Buffalo Bill’s Wild West Show. Although there is no poster advertising Buffalo Bill’s Wild

West Show in Harmony, however there is a framed picture of Buffalo Bill Cody on the wall in the Silver Dollar Saloon.
It would appear the Judge has taken time to collect wanted posters and used them to decorate the walls of his Saloon. There is also a framed portrait of the celebrated beauty Lillie Langtry dated 1912 hangs in the Saloon. As it happens the Judge of Harmony has something in common with Judge Roy Bean, who 1882, moved to southwest where he built his famous saloon, the Jersey Lilly, and founded the hamlet of Langtry. Bean had never met Langtry, but he had developed an abiding affection for the beautiful actress after seeing a drawing of her in an illustrated magazine.
There is also a framed poster for The Adams Express Company which had its beginnings in 1840, and retaining its company name as late as 1871. And an unframed Chicago and North-Western Railway poster of the 1870s promoting free homestead lands in the also adorns the walls of both the Silver Dollar Saloon and the Sheriff’s office. So does this poster place the town of in the State of ? So far there are three such candidates!
Two further WANTED posters can be seen, one for Jesse James has a reward of 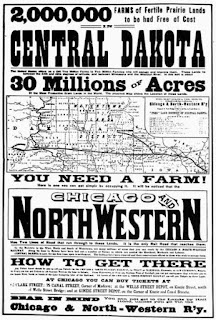 $500 issued by the St. Louis Railroad, being in , date unknown. While the ‘Pinkerton’s National Detective Agency’ with offices in Boston, New York, Philadelphia, Denver, Chicago, Kansas City etc, issued a WANTED poster for one Oliver Curtis Perry dated 1895.  Would there still be old WANTED and advertisement posters from the mid to late 1800’s adorning the walls of the Silver Dollar Saloon? I would not have thought so, unless the Judge simply used them as decoration. But that doesn’t explain them being pasted to the walls in the Sheriff’s office! There is one final poster which I have yet to mention, ‘The Bishop Is Coming,’ which also dates from the late 1800’s, the original poster having been printed in . Now why should a poster, advertising an event in , be pasted to the walls of the Saloon and Sheriff’s office? Because the Bishop is to give services in George and Human’s Hall wherever that is in ! If the poster, announcing ‘The Bishop Is Coming,’ places the town of in , where might this George and Human’s Hall be? And mentioning halls, look what they have done to the Recreation Hall. They fitted it out as the Silver Dollar Saloon, and in that lies my conclusion. That the town of is not steeped in American Wild West history of the 1800’s, but is a back-lot of a film studio dressed to look like an American frontier town. And in that there lies a parallel between fact and fiction. Harmony is also part of the village which has been dressed up to look like a frontier town of the American 1800’s. I suppose Frank may not have known at the time that the picture of Lillie Langtry is dated 1912. To my eye the Town of is set sometime in the 1800’s, because it shows no attributes to a modern town in the early 1900’s.
During the many years I spent researching material for my book ‘The Prisoner Dusted Down,’ it’s been quite astonishing the places the prisoner has taken me.

Be seeing you
Posted by David Stimpson at 07:20