They Come For You In The night! 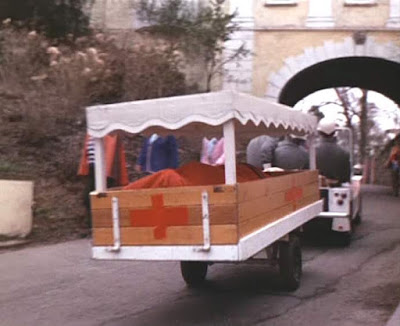 Only in ‘Do Not Forsake Me Oh My Darling’ they didn’t! Instead of going for No.6 in the night when he’s sedated after drinking his nightcap of hot chocolate, they came early in the morning when hardly anyone was out and about. And it wasn’t three medics who came for No.6, but four security guards and one medic driving the ambulance. Perhaps it was a question of time. Can you imagine the mess and chaos left behind in 6 Private, after four security guards went into the cottage? No.6 would have put up one hell of a struggle, no doubt the cottage was left in a right mess, and things have been overturned, things strewn about as he desperately tried to fight off the four security guards. But they didn’t manage to overpower No.6 because he was still struggling when it took the four guards to manhandle him out of the cottage across the square and put him into the Red Cross trailer. Finally at least one of the guards must have struck No.6 over the head with a truncheon rendering him unconscious, because the medic doesn’t leave the Mini-Moke, into which the four “Snowdrops” clamber before it drives off to the hospital.
It seems a strange way of going about things, especially when the job could have been made so much easier in the more usual manner. Also this is the first time “Snowdrops” are seen abroad in the village. The only other time they are seen is below ground patrolling the passage ways beneath the village in ‘The General,” and latterly in the cavern during ‘Fall Out.’

Be seeing you
Posted by David Stimpson at 07:17