If anyone should ask me what my favourite episode is I should have to say ‘Arrival,’ and if I were asked to name my top 5 favourite episodes I’m afraid ‘It’s Your Funeral’ would not be listed in that number. In fact I would be hard pressed to name it in my top 10 episodes of ‘the Prisoner.’ Not that I have anything against the episode passé, it’s not a particularly poor quality episode, and I would agree with Rick, that it is deserving of more credit than it receives. I certainly would not subscribe to the idea of watching the series minus ‘It’s Your Funeral’ for example, if one took that attitude there’s no telling where that would end, as that attitude could be extended to other episodes!
To my eye ‘Its Your Funeral’ suffers from one thing, money, and too much reliance was placed on the use of stock film footage - that’s two! The budget of some £75,000 was set per episode, the trouble is that far too much of that was spent on the four episodes ‘Arrival,’ ‘Free For All,’ ‘Dance of the Dead,’ and ‘Checkmate’ filmed at Portmeirion. 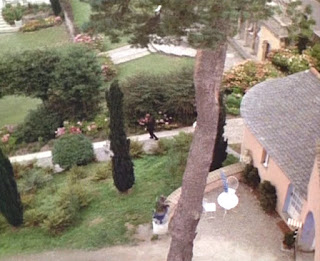 With regard to the over use of film stock footage, you’ll have noticed this naturally, that when No.6 leaves the watchmaker’s shop he goes off to see No.2 in the Green Dome. When in actual fact he’s on his way to the café on the day of his arrival in the village. In this short scene the Prisoner can be plainly seen wearing his suit and not his village attire. Mind you if all the different angles had been used in filming the Prisoner on his way to the café, in the finished episode, it would have made the scene far too long and would have become increasingly boring! My point being, that it is such a pity more time was not spent in filming No.6 simply walking about the village. At least that way when they inserted film of No.6 supposedly on his way to the Green Dome, he would be seen wearing his village attire, and not his suit!
Pat McGoohan, I write “Pat” simply on the basis that McGoohan didn’t like being called “Pat,” famously criticised director Robert Asher on set in front of other cast and crew being under stress at the time, well Pat only had himself to blame. He was trying to do too many jobs all at the one time. He should have placed his trust in others who worked on the series, and let them do their jobs. He should have given director Robert Asher a set of the scripts for him the go through, that way the director would have had at least some knowledge about the series, and that would have helped him in directing ‘It’s Your Funeral,’ in my own humble opinion. As for the main characters, namely Annette Andre, Mark Eden, and Derren Nesbitt, as Rick pointed out in his ‘Unmutually Speaking’ “Number Six’s ‘extra spikiness’ towards the Watchmaker’s Daughter, especially earlier in the episode when his character shows a natural and understandable mistrust of the female, is made all the more spiky and uncomfortable by McGoohan and Andre’s dislike of each other. This adds great tension to the scenes, and Annette gives a great ‘frustrated’ performance throughout the episode because of it.” And Derren Nesbitt played his role as the interim No.2 as though he had no idea what he was doing. Well Derren himself had no idea of what he was supposed to do. Now to my mind it should have been the job of the script editor to appraise Derren of the role he was about to play. Sadly George Markstein had left the production by then! And yet, had everyone been the best of chums, and knowing exactly what they were supposed to be acting we might well have ended up with something a whole lot tamer don’t you think? It strikes me that throughout ‘the Prisoner’ series there are a number of unknown quantities or elements that come together in order to make the series what it is. Without them we might well have had a very different looking series. Now we come to Mark Eden as No.100, it takes a man to wear a pink blazer! Both Mark and Leo McKern could have swapped notes on McGoohan’s rough treatment during fight scenes. Although the fight between No.6 and No.100 is particularly ferocious, and it looks to me that Mark Eden probably caught McGoohan on a particularly bad day, so perhaps McGoohan vented his frustration and anger in that fight scene with Mark. Towards the end of that fight scene the village Guardian appears, No.100 thinks he is saved. But instead of attacking No.6, it sets upon No.100 instead. The short film sequence of 100 being suffocated by the Guardian is of course seen during the Guardian’s first appearance in ‘Arrival.’ And yet I cannot for the life of me understand why the Guardian attacked 100, perhaps it wasn’t 100 it had come to save, but No.6! 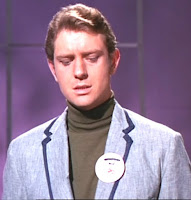 Now we come to the “bit part” of No.22 played by Mark Burns. No.22 isn’t like most of No.2’s assistants, because although he doesn’t appear to do much of anything at all, he does serve two masters at the same time. He sees Plan Division Q as murder, which I think he probably sees as a dirty business, but is powerless to prevent the murder of No.2. There’s really nothing very remarkable about the character of No.22, except his remarkable resemblance to No.14 of ‘Hammer Into Anvil’ played by Basil Hoskins. I have sometimes 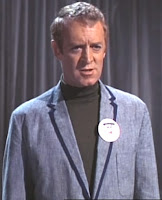 wondered if Basil was originally intended to carry on his role of No.14 in ‘It’s Your Funeral,’ considering Mark Burns likeness to Basil Hoskins, and the fact that both No.14 and 22 are dressed identically. I have made comment about this before on both my Prisoner based blog, as well as in my book, but it seems to go over everyone’s head. I read in Andrew Pixley’s complete production guide to ‘the Prisoner,’ how the revised script introduced the game of Kosho played by No.6 and a “well built opponent.” Basil Hoskins can be seen as No.6’s opponent during the action of the Kosho sequence for ‘It’s Your Funeral.” In ‘Hammer Into Anvil’ its No.14 {Basil Hoskins} who says he would like to dust No.6 down, and accepts No.6 challenge to a bout of Kosho. Again reading from Andrew Pixley’s book “The game of Kosho from ‘It’s Your Funeral’ reappeared in act three as No.6 faced off against No.14. So I take it that Kosho was filmed for ‘It’s Your Funeral’ in which No.14 played by Basil Hoskins appears in some shots as No.6’s opponent. So why didn’t Basil appear in the rest of the episode? Perhaps he was unable to for some reason, due to other acting commitments, or illness. That would certainly explain Mark Burns’ appearance in the episode as No.22. But not why the two characters are dressed identically. If it wasn’t for the game of Kosho appearing in both episodes it wouldn’t matter. But throw it into the mix and it brings confusion, but then without the element of confusion, where would ‘the Prisoner’ be?
The main plot is to execute a loyal and devoted No.2, and blame innocent villagers for the so called assassination. However there are underlying sub-plots as No.6 battles the machinations of an interim No.2. Also relationships, that of daughter Monique and her father, there is no mention of her mother, perhaps she had passed away, the relationship between No.51 who has been radicalized by No.100. Also the relationship between No.2 and his assistant No.22 who knows all about Plan Division Q, he doesn’t like it, but has to go along with it being powerless to stop it. And what about this No.2 who No.6 failed to recognize 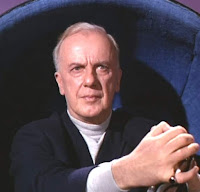 because he had never had any dealings with before? What has this No.2 been doing all this time? Obviously he’s been busy working behind the scenes for the good of the community. I’m sure I do not have to list all his achievements and the plans he has made. So is this No.2 the permanent No.2 who is now about to retire? We have seen No.2’s come and go, we even saw one elected to the position. But in this case is Appreciation Day really all about the retirement of and selection of the new permanent No.2? The one time interim No.2 {Derren Nesbit} now chosen as the new permanent No.2, destined to carry on the work of his predecessor behind the scenes until the time of his own retirement? ‘The Prisoner,’ it still gives one plenty to think about!

Be seeing you
Posted by David Stimpson at 07:23