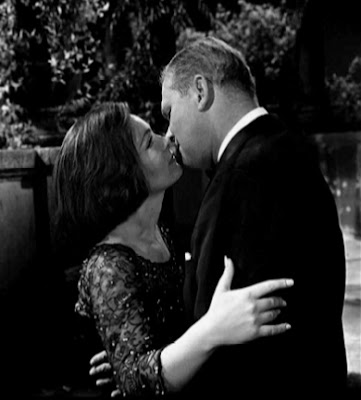 Here No.6 in the guise of the Colonel, is caught in a romantic embrace with his fiancee Janet Portland during the Prisoner episode Do Not Forsake Me Oh My Darling.
Zena Walker must have been disappointed when she saw that it would be Nigel Stock she would be kissed by him, instead of finding herself in the arms of Patrick McGoohan. After all she would not be the first woman to be attracted to Patrick, and she would not be the last. But Patrick McGoohan was of course a maried man, married to actress Joan Drummond. But it was possibly the attraction of someone who is unobtainable, that makes the attraction!
Be seeing you
Posted by David Stimpson at 08:28