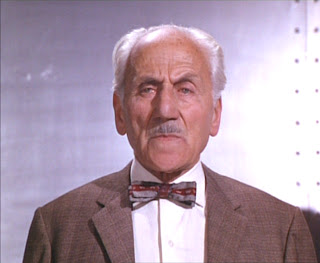 On the face of it, it would seem that Professor Jacob Seltzman did what many before him have attempted to do, and that is to successfully escape the village.
The escape was cleverly done. Because Professor Seltzman had progressed further than anyone had anticipated, buy swapping the minds of three people at the same time, which allowed Seltzman to escape in the guise of the Colonel! But did he?
We assume that Seltzman escaped, because we see the helicopter flying away from the village. This is something we also watched at the end of It's Your Funeral, but in that case we also witnessed the helicopter turning back towards the village with the retired No.2 on board. So why could not that have happened when Professor Seltzman was escaping? It would have taken but a moment for No.2 to have contacted the Control Room to give the order to contact the helicopter pilot to return to the village. Or failing that, to have an opertator in the Control Room to take control of the helicopter, and fly it back to the village by remote control, as what happened in Arrival when No.6 attempted to escape the village by helicopter.
We only assume that Professor Seltzman escaped the village because of what we see on the television screen. But if he did, then Professor Jacob Seltzman is the only man to have escaped the village, because no-one had done it before. Well not until the violent, and bloody revolution of Fall Out!
Be seeing you
Posted by David Stimpson at 09:13