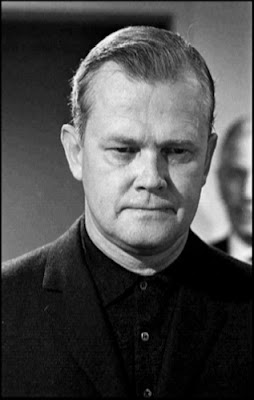 Nigel Stock may have been a fine actor, but he was wrongly cast as the Prisoner. Although Stock said that he'd got into the character of the Prisoner, and played it like Patrick McGoohan, {or words to that effect} I don't! I mean Stock is a different size to McGoohan, which means that's not even the Prisoners suit of clothes he's wearing.
In my opinion, it should have been Patrick McGoohan's stunt double on the production, Frank Maher, who should have played the Prisoner in the role of the Colonel. At least that way, while the mind of the Prisoner was in the body of the Colonel, he would have acted just like how McGoohan would have. Because it's the mind that controls the body.
And remember when the Prisoner woke up that morning of Do Not Forsake Me Oh My Darling back in his own London home? An arm is raised and the Prisoner looks at his wrist watch upon his wrist to see the time. At that moment the Prisoner should have realised that something was wrong, seeing as how that wrist, and hand was not that of the Prisoners. Mind you they were not those of Nigel Stock either. The cameraman Len Harris filmed his own wrist and hand as those of the Colonel!
BCNU
Posted by David Stimpson at 08:39