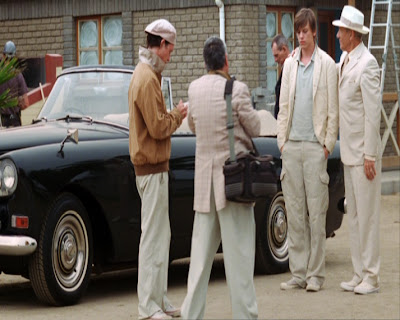 Fans of the 1960's series the Prisoner, will recall the village newspaper The Tally Ho, with its contributor No.113 and his photographic colleague No.113b. The one interviewed No.6, who was running for election to the position of No.2, while No.113b took his photograph.
Well I have to say that it looked very much as though the village of the 2009 series THEPRISONER has no newspaper. But surely that cannot be the case, because as Two and his son 11-12, pay a call to a building site in the Village, under the project of 'More Village.' Two and his son are pictured here with two members of the press, a photographer and a reporter interviewing Two, about his ambitions for 'More Village.'
The thing about THEPRISONER, is it's subtlety. It's not in your face like the original series.
BCNU
Posted by David Stimpson at 08:38