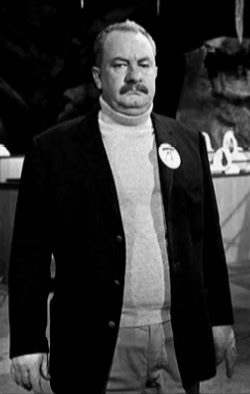 I'm not so sure about the title of this piece of blog really. Because Leo McKern, at the time of Fall Out, was far from being a new man! In fact Leo McKern didn't want to come back to the Prisoner, didn't want to work with McGoohan again, not after his experience during Once Upon A Time. Leo was in a terrible state, during and after that episode, in fact he had a breakdown.
It was the one to one role playing you see which did for Leo McKern. When playing the role of the Headmaster, and was rolling about on the floor with No.6 at his throat, McGoohan was playing the role for real it seemed to Leo McKern who saw something in McGoohan's eyes, and thought McGoohan was going to kill him!
And it was because of his experience of playing against McGoohan in Once Upon A Time, which made McKern say that he would not play against "that man" ever again! But as we bear witness, Leo McKern was persuaded to do just that.
As for the make-over for No.2, well Leo McKern had had his hair cropped, and beard shaven off for a previous film  production before going to work on Fall Out, hence the need for a change of appearance for No.2.
BCNU
Posted by David Stimpson at 08:28