Is No.2 Fit For Further Term? 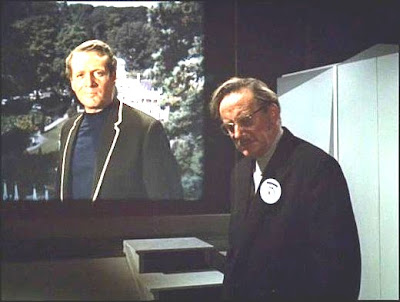 The headline is a question regarding No.2's health, not his ability. Here No.2 is a broken man at the end of A B & C. He had underestimated No.6's ability. But the fault was not all his, although he must surely pay the price.
However this is not the end of this particular No.2, as we encounter him once more as he is brought back to the village for a second term of office in The General, in which No.2 is much more relaxed and confident, perhaps because he is not directly involved against No.6, only with overseeing the educational experiment of Speedlearn.
It has often been debated, in the past, which episode came first, A B & C or The General? Because in the opening sequence dialogue when No.6 asks Who are you? No.2 responds confidently I am No.2. But in the same dialogue of The General No.2 responds to the same question The new No.2. No.2's first response suggests No.2 has been in the village for some time, whereas, the second response says he's new in the village, and so The General should really preceed A B & C in the screening order. But then again, in The General No.2 tells Madame Professor that he and No.6 are Old friends, which turns the whole thing on it's head again!
Be seeing you
Posted by David Stimpson at 08:46