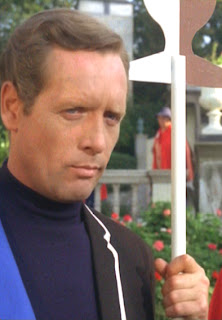 "Sir, you play a fine game" No.14-the chess champion told No.6. Well that's as may be. But No.6 was but a pawn, and moved only two squares on the board during the game of human chess in the episode Checkmate. Really I think that No.14 was referring to the game No.6 plays against the authority behind the village, the game he plays against No.2. No.14 may be too old for escape, but at least he can still defy them by keeping his mind alert. that's why he plays chess. And by using people, is the only opportunity one gets for power in the village.
Mind you, I could never figure out why No.6 asked No.8-the white Queen who No1 is? I mean whatever made No.6 think that No.8 would know who No.1 is? Mind you, I suppose No.6 had to ask someone. No.2 wouldn't have told him, and there was no point in picking up the telephone to ask the telephone operator to put him through to No.1. But if the telephone operator had, and if No.1 had answered, whose voice would No.6 have heard? No.6 might very well have ended up speaking to himself, if we are to believe the outcome of No.6 finally getting to meet No.1 in the final episode of Fall Out.                  Be seeing you.
Posted by David Stimpson at 09:32