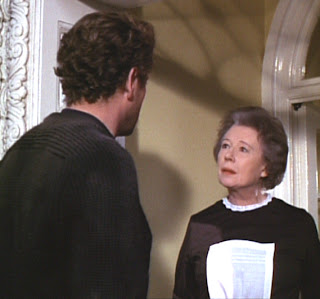 Martha, Mrs Butterworth's housemaid, gave the Prisoner a frosty reception when he finally arrived back, at what had once been his home in a previous life, during Many Happy Returns. And when Mrs Butterworth was brought to the village as a new No.2, she brought Martha with her. And that would have created a conflict in the village. A conflict between Martha and the Butler, who had up until then, served each incumbant No.2 in turn till now. Having said that, perhaps my idea of there being a conflict between the Butler and Martha, would be wrong. After all, Martha is a forthright woman, all you have to do is observe her attitude to the Prisoner standing on the doorstep in the above picture, to understand how Martha would have behaved towards our diminutive friend the Butler. As for the Butler, well he serves unquestioningly, and would have in all probability, bowed at Martha, who would not allow anyone else serve her mistress, and leave her to it. The Butler suddenly unemployed! On a slighlty different note. The village must have come as quite a shock to Martha, and no doubt her hoity-toity manner would see herself above many of the citizens of the village, seeing as her mistress is the newNo.2, Chairwoman of the village. But then Mrs Butterworths term of office in the village would come to a natural, if not a premature conclusion. Her time to leave the village. Mrs Butterworth trusted not to talk to anyone about the village, but what of Martha? Mrs Butterworth left her maid in the village, and that must have come as an even greater shock to Martha, betrayed by her mistress whom she had served for many years. Left high and dry, an ordinary citizen in the village! 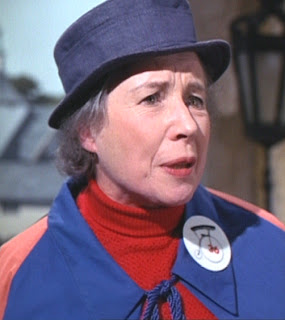 Here's Martha, No.36. And it was during that episode of It's Your Funeral, when she encountered the Prisoner No.6 again. No.36 wanted to buy some sweets from a kiosk, but her weeks credit allowance had been all used up, and would have to go back tomorrow. But No.36 pleaded that she couldn't go a whole day without her sweets! So No.6, holding no grudge against Martha for her attitude towards him back in London during Many Happy Returns, bought a bag of sweets for her.
It is interresting to note, that in the original script for It's Your Funeral, it was not sweets which No.36 could not go a whole day without, but cigarettes!
I'll be seeing you
Posted by David Stimpson at 08:42