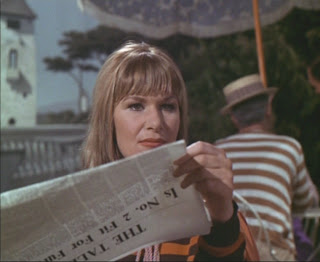 This is No.14, the doctor in A B & C who is able to get inside No.6's dreams with the aid of a new drug she has developed. But we are not concerned with that here, oh no. The question was once put, "Why is No.14 reading a copy of The Tally Ho from The Schizoid Man? Well the answer is, she isn't, but then again she is, depending on how you look at it. You see there are a couple of complications about this particular edition of The Tally Ho, the first is the headline Is No.2 Fit For Futher Term? This headline obviously refers to No.2 of A B & C, not of The Schizoid Man, not questioning No.2's ability, but asking a question of the man's health - he has a stomach ulcer, that's why No.2 drinks a lot of milk in both A B & C and The General. The second complication is, that this edition of The Tally Ho is dated Feb 10th. Here is an upside down image of The Tally Ho read by No.14. 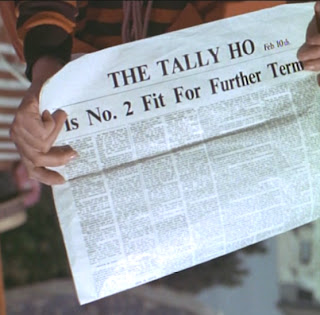 And this edition has the same date as The Tally Ho in The Schizoid Man, as seen in the third picture, here. 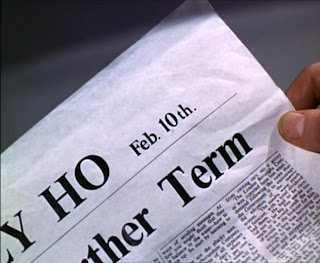 Now I know that the day-date calendar belonging to No.6 shows February 10th, and I don't question that fact, although perhaps I should, as nothing in the village should be taken at face value, although it is easier to do so at times. The date of the Tally Ho, the only issue to actually show the date, was to make No.6 think that it was still Feb10th a month after his abduction from his cottage, to that of 12 Private, and his re-release into the village after his conditioning to being No.12.
So does this particular issue of The Tally Ho refer to A B & C or The Schizoid Man? Well both actually. The headline refers to No.2's medical condition in A B & C, and the Feb 10th to that particular date in The Schizoid Man, in which episode you only see the top righthand corner of the newspaper, and in A B & C you see the whole of the top half of the newspaper. Back in 1967, as the Prisoner was being produced, it was perhaps thought that no-one would notice the date Feb 10th on The Tally Ho newspaper in A B & C, and even if they did, what would it matter? Well obviously it doesn't. But questions have been asked about this issue of The Tally Ho newspaper, and anyway, it makes an interesting point.
Be seeing you
Posted by David Stimpson at 09:11