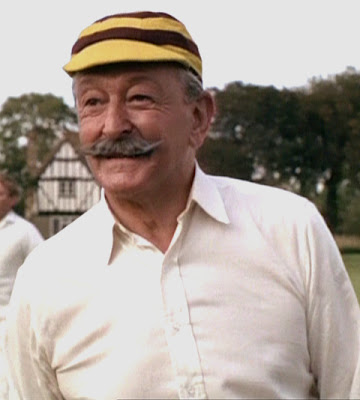 Colonel Hawke-English, who was murdered at the wicket, by an exploding cricket ball, just one run short of his century.
The identity of the actor who played the brief role of Colonel Hawke-Englishe in the Prisoner episode The Girl Who Was Death, has been in question for some little time. Certainly the actor goes uncredited for his role in the episode end credits. My wife said that she had seen the actor before, in an episode of Randell & Hopkirk but couldn't remember which episode!
I tried tracking the actor down on the Internet, hoping to find a photograph to work from, or amongst actor directories, without success. However, today I can now tell you that the actor who played the role of Colonel Hawke-Englishe is George McGrath.
I would like to take the credit for this discovery, but it was my wife who found the actors name, credited for his role in the Girl Who Was Death, in a book by Andrew Pixley, which was published in-line with the Prisoner 40th anniversary DVD box set. So the credit must go to Andrew Pixley. However, I shall keep trying to find another picture of George McGrath, if only for my own satisfaction, to prove beyond any shadow of doubt.   Be seeing you
Posted by David Stimpson at 15:43