60 Second Interview With The Colonel 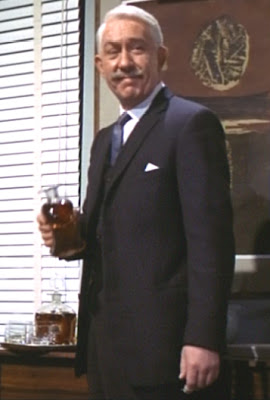 No.113 "So, this is London is it?"
The Colonel "It's my office certainly."
"Is it?"
"Yes. Drink?"
"Whiskey."
No.113b "Smile" {click goes the camera}
"A large one?"
"I'm a newspaperman Colonel, what do you think?"
"Of course. So what can I do for you?"
"Number Six......"
"Who?"
"Don't you know who I'm talking about?"
"All I know old boy, is that you came here asking for an interview.......what newspaper did you say you work for?"
No.113b "Smile" {click goes the camera}
"I didn't. But my photographic colleague and I contribute to The Tally Ho you know."
"No, I didn't know. Look you had better leave."
"Why's that Colonel?"
"Because I'm expecting an important delivery within the next few minutes."
"A delivery of what?"
"I rather think that's my business."
"Humour me Colonel?"
"Well, it'sd not a what, it's whom!"
"It's not Number Six is it?"
"Number Six, Number Six, who is this Number Six you keep going on about?"
"He's not been seen in the Village for twelve hours now. Nor has Number Eight for that matter. Do you think they've absconded together?"
"The Village?"
"Surely you know about the Village Colonel?"
"Look old boy........."
"Perhaps we should call Number Two!"
"Number Two..........."
"Are you naturally stupid Colonel, or do you work at it?"
{Suddenly the door of the Colonels office opens, and two men wheel a large crate into the room.}
"Hello what have we here?"
Fotheringay "Look gentlemen, you'll have to leave now. This is offical business."
No.113 "What is it, a crate full of paper clips?"
Fotherirngay "Two crates full actually. There's another crate outside in the lorry!"
The Colonel "Right Fotheringay, get the crate open."
No.113 "One-one-three b have your camera ready."
{The crate is opened}
Fortheringay "Paper clips, they're boxes and boxes of paper clips!"
The Colonel "It's the wrong crate Fotheringay. Get the other cate in here quick!"
"But the Lorry's gone Sir!"
The Colonel "Well bugger me!"
No.113 "Yes Colonel, they just might!"
No.113b "Smile"{Click goes the camera}