The Character of A Man 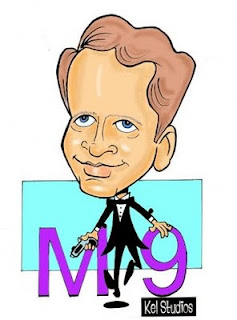 I think the following two caricatures capture the changing character of Patrick McGoohan quite well, the first......... John Drake. Young and clean cut. A man with hign morals and beliefs, who can appreciate an attractive and beautiful woman, but at the same time is able to keep women at arms length. He's easy going, and approachable.
This is a man who is generally happy in his work, and only kills as a last resort. Yet despite the charicature, Drake never carries a gun! But yet in the Danger Man episode Fair Exchange we see that Drake does have  a gun, which he keeps in a drawer of his desk.
In general, John Drake is a clean cut young man, who smokes, but rarely drinks. Perhaps becasue he likes to keep his wits about him.
So what went wrong, as with the next caricature..............the Prisoner-No.6? 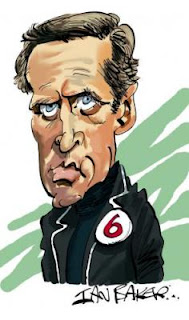 He's a grizzled, worn looking man who drinks and smokes far too much, but who apparently still keeps women at arms length. He is a driven man. single minded. He pushes and bullies his way to what he wants, and never suffers fools gladly. With the Prisoner he forged his own end, sealed his fate, forever to be remembered more for the Prisoner he created, than for much of his previous work, which was his best in my opinion. Once easy going, and approachable. Who later became bad tempered, and unapproachable.
The two caricatures catch the mood of Patrick McGoohan character very well. It makes McGoohan look like a type of Dorian Gray character. The one young and clean cut, full of life. The other grizzled and gnarled, as though from the worldly sins being laid upon him.
I'll be seeing you.
Posted by David Stimpson at 08:35