The Affair Of The Bruised Fingernail! 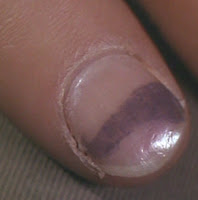 Sounds like an affair of The Man From U.N.C.L.E .But in this case, the bruised fingernail was caused one evening in No.6's cottage of '6 Private,' No.24 was pressing No.6 for him to allow her to take more Polaroid pictures of him for the forthcoming photographic competition at the Village Festival. And it was while No.24 was angling to take another picture, that she clumsily knocked over a soda siphon, bruising No.6's finger. You can see the bruise under the fingernail. Hardly wounded for life, but which as it turned out, was lucky for him.
Now below is one of those Polaroid pictures No.24 took of No.6 in his cotttage. This Polaroid was later taken from No.6's cottage and given to Curtis, who later produced it in No.2's office of the Green Dome, after No.6 attempted to prove that he was the original, and Curtis 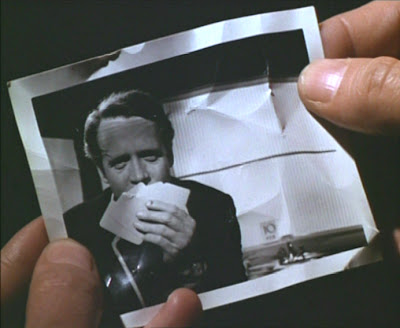 the economy pack. But of course it all went sadly wrong for No.6, as we witnessed. This Polaroid was used by Curtis, out of the breast pocket of his blazer, to help prove his identity, that he is No.6. But surely, the produced Polaroid should have proved that Curtis in not No.6. Because Curtis as No.6, wears a cream blazer with black piping. While No.6 wears a black blazer with off-white piping, as in the Polaroid picture when it was taken!
In No.2's office No.6 snatches the Polaroid out of the hand of Curtis and studies it. He studies it again much closer in the confines of his cottage one evening, and he still cannot see it! Oh he spots the day-date calendar in the background, showing the date Feb 10th. He compares the bruised fingernail in the Polaroid, the bruising at the base of the nail, with that of his own with the bruising now half-way up the fingernail. But he fails to spot the blindingly obvious.............the black piped balzer! The thing is you see, originally both No.6's in the episode of The Schizoid Man were to have worn identical black blazers. However that was changed on the belief that it would make it far too difficult for the television viewer at the time, to tell the difference between the two No.6's. And that's why the episode doesn't quite work after the change of blazer was made. It would have been much better to have kept both 6's dressed identically. What's more, I think it was rather presumptous of McGoohan and his production team to presume the intelligence of the television viewer of the day, back in 1967.  BCNU
Posted by David Stimpson at 09:00