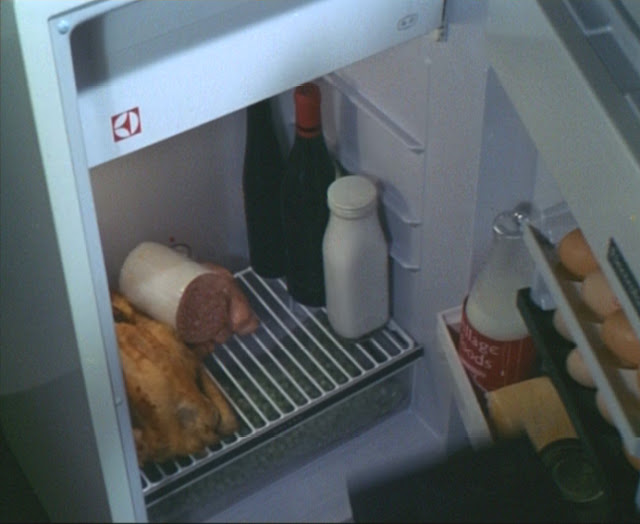 No.6's refrigerator is an Electrolux, please to observe the logo. No.6 certainly ate well, a roll of Salami, eggs, cooked chicken, cheese, milk, and brussle sprouts! But what's this? Two bottles of non-Village wine! And a bottle that looks like a bottle of 'Bicarb' or Milk of Magnesia! Or is the contents of the refrigerator for personal consumption, by Patrick McGoohan himself, and perhaps director David Tomblin, and other members of the production crew?
At this point No.6 is about to place his black loudspeaker into the refrigerator, thus rendering peace and quite to his cottage. It would seem that No.6 has learned that good old fashioned brute force doesn't always work. Previously on the day of his arrival in the Village, when the Prisoner became annoyed with the insesscent music being piped into his cottage, via a loudspeaker which has no on/off switch, he trampled it to pieces underfoot. Yet the music remained. So by this moment during The Chimes of Big Ben, No.6 has learned to be more subtle, by simply placing the loudspeaker in the refrigerator!   Be seeing you
Posted by David Stimpson at 09:24