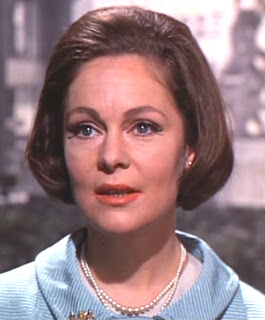 ......... Janet Portland, pictured here, has been keeping an eye on her fiances house in Buckingham Place, Westminster, London, who was then passing by during the episode of Do Not Forsake Me Oh My Darling and spotted the Prisoners car parked outside his house, but found someone else living there, the Colonel.
But what if Janet Portland had been passing by on an earlier occasion, say during Many Happy Returns, and saw her fiances car parked outside in the street. She would have knocked on the door, as she did in Do Not Forsake Me Oh My Darling, only to be confronted by Mrs Butterworth, or worse, by her house maid Martha on the door step, what then?
But if you think I've squeezed this scenario dry, then you would be wrong. What if Janet had just been passing by along Buckingham Street, a few minutes earlier, and there he is, the Prisoner, her fiance loitering outside No.1 Buckingham Place.......that scenario would certainly have messed things up for Mrs Butterworth!
I'll be keeping an eye open for the Prisoners return!
Posted by David Stimpson at 08:25