Excatly When Did Mrs Butterworth Take up residence........ 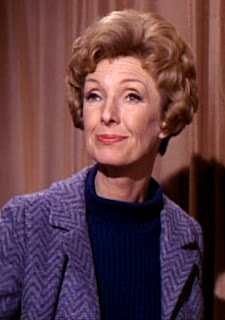 Living in the Prisoners home, to make nothing of taking possession of the Prisoners Lotus 7! We are told by Mrs Butterworth herself that she has a taste for a little speed, but since when did an Estate Agent become car salesmen? Mrs Butterworth said that it was the Estate Agents Stumble and Croyden who arranged it all, that the car was for sale. I mean what was the Prisoners car to an Estate Agent? What's more, there was still six months lease to run on the house!
So when did Mrs Butterworth take up residence at 1 Buckingham Place? Its very difficult to estimate. It might have been arranged a few days before the Prisoner set sail on his epic Sea voyage, so that Mrs Butterworth was safely ensconced in the hosue before the Prisoners return to London. I think was can say that Mrs Butterworth departed 1 Buckingham Place for the Village, sometime after she was interviewed about her role in this matter by either the Police or Special Branch.
Back in the Village, No.6 soon discovers that Mrs. Butterworth is No.2, and keeping her promise, she baked him a birthday cake, which has six candles upon it. Whether Mrs Butterwoth was in the Village at the outset of the episode Many Happy Returns cannot be reckoned. She might have become involved with the plan, as we saw she was, but didn't take up her role as the new No.2 until the Prisoner was safely on his way back to the Village, having arrived there herself some little time before him.
Actually, and this would depend upon just when Mrs Butterworth moved into 1 Buckingham Place, that she or her maid did not encounter Janet Portland of Do Not Forsake Me Oh My Darling. Because in this episode Janet Portland was walking along Buckingham Place when she was her fiances car parked outside his house. Of course she knocks on the front door and eventually encounters the Colonel, apparently having taken up residence in the Prisoners house. Now what if one day, Janet Portland had been walking along Buckingham Place, and saw her fiances car parked outside his house, thinking that he was back, from wherever he had been, approaching the house with heart beating, knocks on the front door only to encounter........Martha, Mrs Butterwoths house maid, just as the Prisoner had once done. What then? Surely Janet wouldn't accept that some woman was now living in the Prisoners house! She would wish to speak to Matha's mistress, Mrs Butterworth who would in all probability tell Janet Portland the same tale she told the Prisoner, showing Janet her lease to the house, and the log book of the car. It would be a tricky moment for Mrs Butterworth. But remember that she had been interviewed by either the Police or Special Branch, and they found her story reliable. So it would be a piece of cake for her to convince Janet Portland.....surely.
And afterwards what? Mrs Butterworth and her house maid Martha depart London for the Village. The house returns to the former occupier, with six months still to run on the lease. And the Lotus is garaged once more. Well someone had had to be looking after the Lotus, because it couldn't be left parked on a yellow line in Buckingham Place. Parking tickets would have been placed on the windscreen, and if these had been ignored, then a Police warning notice would have been placed on the car, and eventually towed away to a Police car pound! And that is perfectly true to real life back in the 1960's. I'll be seeing you.
Posted by David Stimpson at 08:46