How Does It Work - That Little Black Box? 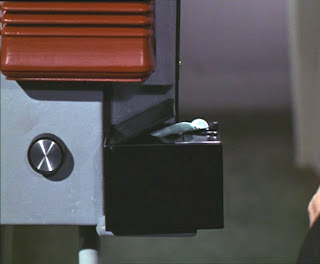 Used in the episode of The General to collect Security Pass discs at a security checkpoint in the Town Hall. It works like this, as you see it on screen, you place your disc in the little slot, there's a loud whirring noise {you don't hear this in the episode} the lid of the black box lifts up, a little plastic hand pops out, collects the disc, and takes it into the back into the box with a snap of the lid.
It appears to me, that despite all the technological break-throughs in the Village, that there is still room for the use of such little simple gadgets as this. The Village's Administration wastes nothing, everything is put to some use, even the most insignificant little black box, a toy really, that you could imagine.

It is ingenious enough. But how does the little black box tie into the security system of the Town Hall? I cannot believe that it is wired up to anything. I supppose that by simply taking the security Pass disc it is indicating on camera to an observer somewhere, that the Top Hat Official is legitimate and so the electrical force-field is then turned off to allow a person to 'proceed to pass.'
Here is the little black box in question. In fact it's a Magic Money Box, I have one just like it. I have it placed in a doorway, so that I have to insert a Security Pass disc just to get into the Kitchen! No not really, but it's not a bad idea for a bit of fun that Johnny Prisoner might do.
As No.6 approaches the security checkpoint on the town Hall during The General, he places one of his two Security Pass discs in the slot of the little black box. It doesn't immediately work, and No.6 has to just touch the disc with a finger, well that is perfectly correct, as I have to do the self same thing with mine from time to time. Just to nudge the disc to set the whirring in motion, and out pops a little plastic hand to collect the disc, and snap it back into the box. BCNU
Posted by David Stimpson at 08:43