I Don't Want A Man Of Fragments! 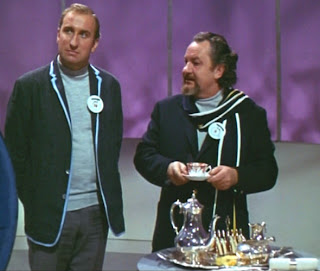 It only needs one small thing No.2 tells No.28, or is it 38 If he will answer one simple question, the rest will follow. WHY DID HE RESIGN?
Well this No.2 obviously hadn't watched the surveillance film footage of the debriefing of the Prisoner by No.2 on the day of his arrival in the Village. Because his predecessor had the very same idea, and that didn't work either. You will recall that during the Prisoners debriefing in Arrival, when he was looking through his personal file. He spotted that the time of his birth was missing from his file. That was a very clever ploy of No.2. Well there you are! No.2 exclaimed Now lets bring it all up to date. Four-thirty-one am, nineteenth of March nineteen twenty-eight. And then the Prisoner had nothing more to say, absolutely nothing. you see No.2 of Arrival had had the same idea as No.2 had had during The Chimes of Big Ben. Get the Prisoner to answer one simple question, like the time of his birth, and the rest will follow......only it didn't! It would appear that the Prisoner was well up on any ploys that were likely to be used against him.     I'll be seeing you.
Posted by David Stimpson at 08:20