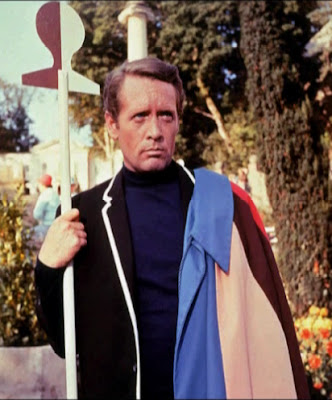 No.6 wears what is thought to be his old school blazer. Indeed this was remarked upon in a throw-away comment by Brother Cave, who was the Archivist at McGoohan's old school of Ratcliffe College. Certainly as the Captain of the school boxing team Patrick McGoohan would have worn a piped blazer.
There has, in the past, been much debate about the blazer No.6 wears in the Village. Some fans say it is black, while others remark upon the fact that it's brown! So is the piped blazer blcck or brown? Well in fact, it's both! In the above picture, taken from the episode Checkmate the blazer looks to be black, while in the picture below, which is also taken from the episode of Checkmate, it's brown. But in both both cases it's the same blazer! 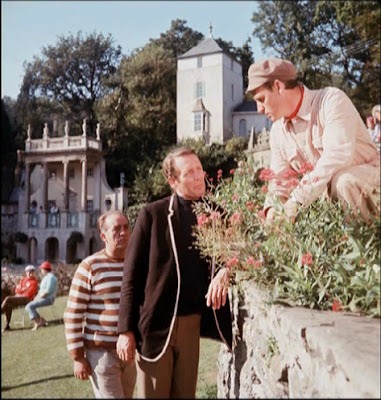 You see it's all a question of sunlight. Such is the cloth of the blazer, that when the sun isn't shining the blazer looks to be black. But in bright sunlight the blazer looks to be brown. I should know, because the piped blazer which I have, and have worn at Prisoner Conventions, is made of the same material. At one convention, someone commented that I was actually wearing the wrong coloured blazer, brown, when it should be black. And on another occasion it was commented that the blazer I was wearing should be brown. But of course all the time, it turned out that I was wearing the right blazer all the time!  Be seeing you.
Posted by David Stimpson at 08:16