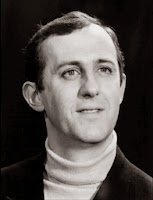 No.113: “When did you first begin to suspect Number Six, or rather Curtis?”

No.2: “I suppose I began to have my doubts in my office, it was a strange thing for Curtis to have said.”
“What was?”
No.113b "Smile" {click goes the camera}
“That I wanted Number Six broken, had broken him. He said it was my idea!”
“Wasn't it?
“He knew it wasn't!”
“And then after Curtis went to see Number Twenty-four you took him to the helicopter.”
“Curtis, was edgy. I'd never known him to be so strung up. Susan once said that he was quite unflappable.”
“Susan who died a year ago.”
“Yes.”
“That's really how you caught Number Six out, wasn't it?”
“Edgy. Reporting to the General, not having had time to think about my proposal I put to him when he first arrived here. I knew something was wrong.”
“Then you went to have a word with the helicopter pilot.”
“Of course, Number Six......”

“The man you were suspicious of being Number Six.”
“Yes. Well I had to be sure. And when I said "Give my regards to Susan."
“And No.6 replied "I won't."
“I knew that this man wasn't Curtis, but Number Six.”
“And by this the helicopter pilot knew to take off, fly a circuit of the Village and land again, instead of taking No.6 to the landing stage.”
“Of course.”
“Susan saved you bacon from the grave then?”
“You could put it like that.”
“If Curtis still hadn't carried that photograph of Susan around with him in his wallet. That was lucky for you!”
“And of course you knew Curtis before he came to the Village.”
“Yes, we were old colleagues.”
“And when you saw No.6, you instantly thought of your old colleague Curtis, and the plan came to you.”
“No it came from the General!”
“What a computer?”
“Look I think I've said enough!”
“Yes Number Two. The sixty seconds are well past.”