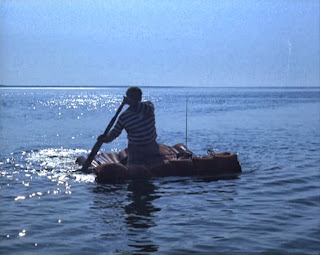 The novelty about "The Village Novelty Raft Race" is that it takes place after curfew! This year's favourite was to have been No.53, who's twin rubber lilo design was the envy of all novelty raft constructors. However No.53 pictured above, had not accounted for the fact that No.6, pictured below would also enter the novelty raft race with a similar design. 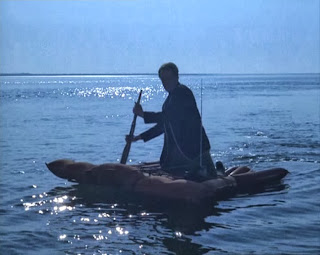 No.6 pictured here in the novelty raft race, arriving at the turning point of M.S. Polotska. M.S.Polotska being the safety boat, along with umpires of the race being aboard.
The race was a tight one this year, and one not short of it's disasters for many of the entrants. Their novelty rafts having sunk like the Admiral's Titanic. Whilst No.73's Iceberg simply drifted away having sunk the Admiral’s Titanic after a sudden collision! Or No.66's oil drums coming loose and leaving him adrift, to be picked up by the safety boat M.S. Polotska. As for No.6's rubber lilo raft, having been simply lashed together with two lengths of rope, which did in fact last the course. No.53 however seemed to have little trust in his own design, because at one point this pair of rubber lilos were found to be abandoned, having drifted back to the shore. This left the winner No.6 of this years "Novelty Raft Race."
At the end of the course No.6 was picked up by the crew of M.S Polotska, where No.2 and No.53-the Rook held a stewards inquiry with No.6 after No.53 accuses No.6 of stealing his design of his rubber lilo raft via a satellite television communications link
But it was pointed out to No.53 by No.2, that he must not beline No.6. After all it was No.6 who strung the pair of rubber lilos together in the first place! So the decision stood, with No.6 this years "Village Novelty raft Race" winner.